The Dissident Republican Easter lily emerged in 1926 as the Irish Republican movement fragmented for the third time since 1916. In late 1925, at the Ard-Fheis of the third Sinn Fein party (1923-25) Eamon de Valera resigned as president, and within months had instigated the formation of a new political party, Fianna Fáil. Once again the Sinn Féin party split and went into its fourth reformation.

At the Cuman na mBan convention October 1925, Madame de Markievicz resigned as president in order to follow de Valera as he devised his new political path. When de Markievicz resigned Eithne Coyle was elected president and Sighle Humphreys vice-president of Cumann na mBan, a new executive was elected and it comprised women who were interned during the Civil War, Coyle and Humphreys were the longest serving female internees, with 410 and 384 days respectively.  It was this executive that instigated the Easter lily campaign.   While Cumann na mBan did not split at this time the organisation suffered a dramatic loss of membership, and by 1926 had less than 400 members countrywide, their coffers were almost empty

In early 1926 the reformed (fourth) Sinn Fein party instigated the first Day of National Commemoration, to commemorate the tenth anniversary of the 1916 Easter Rebellion at Glasnevin Cemetery on Easter Sunday.  Cumann an mBan planned to take part in this event, and early in February the executive saw an opportunity to use the event to raise some funds and perhaps increase membership and they decided to hold a flag day at the cemetery.

Over a series of meeting of the executive committee the women discussed the idea of the flag day, and decided instead to make it a ‘Flower Day’. Sighle Humphreys said they had considered flowers that bloomed in spring such as the crocus and the pansy, but eventually decided on a flower known generically as the Easter lily, (botanical name is Lilium longiforum). 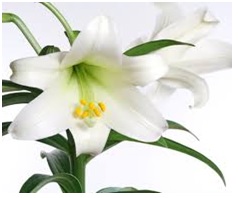 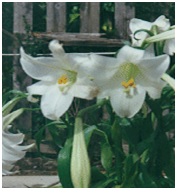 Within weeks Fiona Plunkett sent a circular letter to all branches of Cumann na mBan to explain the purpose of the Flower Day.

The flower we have decided upon is a lily (enclosed find sample) as we consider this would be the most suitable for Easter and it has also the Republican colours…You ought to call a meeting of all Republican women and young girls…  and arrange for the collection at masses and at Commemoration Parades, football matches or fairs during the preceding week.[i]

The first Republican Easter lily was a paper flower. Cumann na mBan ordered 45,000, and asked the IRA for support by issuing a joint proclamation and assisting them in selling the flower.  The men refused the invitation. The first Easter lily ‘Flower Day’ made a profit of £34, but despite their disappointment with lack of support from the IRA, they gave them half the profits. Undaunted, the women continued with the Flower Day campaign every Easter.   In 1929 and Cumann na mBan in its circular proclaimed,

Funds are needed to create an atmosphere favourable to our army… Funds are needed to educate people to resist the Free State and Northern “governments” …When you buy an Easter lily you are directly helping to overthrow foreign rule in Ireland.[ii]

By the early 1930s the membership of Cuman na mBan had shrunk to such small numbers they could not do it alone and an Easter lily committee was formed comprising members of Cumann na mBan, the IRA, and Sinn Fein, consequently Cumann an mBan lost control of the venture 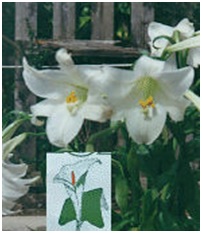 In 1933, there was difficulty in sourcing Irish-made paper for the artificial flowers, and as Cumann na mBan were spearheading a ‘buy Irish’ campaign, a decision was taken to stop making the flowers and instead create a paper flag/badge, which could be worn on the lapel. However, the Lilium longiforum/Easter Lily did not transfer well to the flag and the resulting image is more like the Calla lily. The design they chose is the same design that is sold to this day. 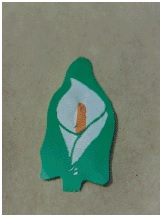 In 1937 Cumann na mBan made a statement about the money raised by the Easter lily campaign:

The men of Easter Week laid down a very definite road for the Irish people to travel towards freedom… All those who support the lily campaign can rest assured that the money raised is devoted to no other purpose than the propagation of these ideals and the securing of the necessary materials for their realisation.[iii]

Cumann an mBan did not recognise the Irish Free State and from the beginning the women refused to apply for a licence to sell the Easter lily. It was illegal to sell the Easter lily on the streets without the permit, and over subsequent decades this led to running battles between Gardaí and the sellers and this led to the misconception that the authorities objected to the sale of the symbol itself. 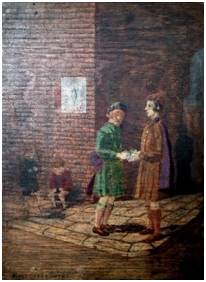 The Easter lily campaign experienced a split in 1970 after the Sinn Féin Party was fragmented by another division, that created Republican Sinn Fein and Provisional Sinn Féin. The former began to sell the lily with a sticky back, while the Provisionals retained the original pin. (giving rise to the expression in the vernacular, the stickies and the pinnies’). In the mid-1990s the Provisional Sinn Féin shop began to sell it in brooch form. Ninety years after its inauguration the Republican Easter lily has remained a potent symbol within the fragmented of the Irish dissident republican movement. It was never a National Symbol.

Easter Lily and an Easter lily brooch/badge depicting the Calla lily. Made in China

The dissident Republican Easter lily can now be bought in all forms, badges, brooches, and various forms of jewellery in tourist shops in Sinn Féin shops, and on the internet.  Furthermore, because the image was never patented anyone can produce the Republican lily for sale. Currently, there are several factories in China manufacturing the Easter lily in all the aforementioned forms for the Irish and international market and they are ‘making a killing’. The dissident Republican Easter lily has in this centenary year become very profitable for non- political entrepreneurs.  Those stalwart women of 1926 can only lie in there graves and weep.