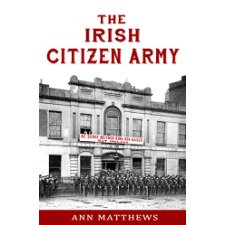 The Irish Citizen Army was originally established as a defence corps during the 1913 Lockout, but under the leadership of James Connolly its aims became more Republican and the IRB, fearing Connolly would pre-empt their plans for the Easter Rising, convinced him to join his force with the Irish Volunteers. During the Rising the ICA was active in three garrisons and the book describes for the first time in depth its involvement at St Stephen’s Green and the Royal College of Surgeons, at City Hall and its environs and, using the first-hand account of journalist J.J. O’Leary who observed the scene, on Sackville Street (now O’Connell Street) throughout the week. The author questions the much-vaunted myth of the equality of men and women in the ICA and scrutinises the credentials of Larkin and Connolly as champions of both sexes. She also asserts that the Proclamation was not read by Patrick Pearse from the GPO, but by Tom Clarke from in front of Nelson’s Pillar. She provides sources to show that the Proclamation was not, as has always  been believed, printed in Liberty Hall, and that the final headquarters of the rebels was not at number 16 Moore Street, but somewhere between numbers 21 and 25.

The Myth of Gender Equality, Women revolutionaries in 1916