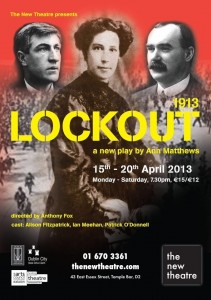 In 1913, the Irish Transport and General Workers Union (ITGWU) had a membership of 20,000 in Ireland with 12,000 in Dublin, and it was having an serious impact on improving workers’ pay. The on-going success of the union led to a group of employers coming together to break the union. In August 1913, the employers in Dublin came together and demanded that their workforce sign a written undertaking that they would not join the union.Larkin called on the workers of the Dublin Tramway Company to refuse to work, and on 26 August 1913, an estimated 700 men complied. The tram service was temporarily restored with the support of the Dublin Metropolitan Police (DMP). Larkin was arrested but released after two days later. On 31 August when James Larkin General secretary of the ITGWU addressed a crowd at a proclaimed meeting Sackville Street the ensuing police brutality left hundreds injured and two men were killed, this subsequently became known as Bloody Sunday.

The hostility of the police to any public protest required that the workers devise some
means of self-protection. On 3 September, the situation escalated when the employers led
by William Martin Murphy demanded that all workers sign a document promising to leave the union and not re-join. It is estimated the hundreds were injured and two men died James Nolan and John Byrne from beatings by the police.

On 3 September 1913, the situation escalated when the employers led by William
Martin Murphy demanded that all workers sign a document promising to leave the union or join any other union. Most refused and over the following days employers locked out
workers. By mid-September, it is estimated that about 20,000 workers were affected and
within days’ thousands of families faced hunger and want.

The Women and Children of the 1913 Lockout