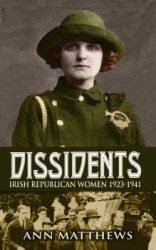 Dissidents continues the story of Renegades and explains how the women of the Revolutionary period disappeared from Irish National politics. For the first time, the 645 women interned during the Civil War 1922-23 are charted in detail and named, thereby creating a substantial basis of knowledge, now being used by other historians.

During the War of Independence 1919-1921 around 10,000 Irishwomen were actively involved in the fight for Irish freedom. So why, with the outbreak of Civil War and in the years following this conflict, did the role of women in Irish politics steadily decline until by the early 1940s only a handful of women were involved? ‘Dissidents’ explores the reasons for this decline. From the divisions caused by the signing of the Anglo-Irish Treaty, which led to a fatal splintering of the women’s Republican organisation Cumann na mBan, through the effects of internment during the Civil War on female prisoners and the relegation of the majority of women in Irish politics to the margins, Ann Matthews reveals the story of Republican women in the years following Irish independence. She also asks whether they were responsible for their own demise in the political arena, leaving future generations of Irish women without a foundation on which to build.